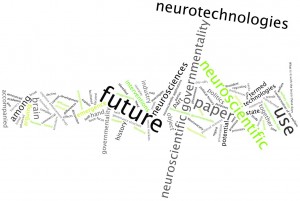 Presentation on the conference: Neurosociety… What is it with the brain these days?
International conference on 7-8 December 2010 at the Saïd Business School, University of Oxford, UK. Jointly organized by The Institute for Science, Innovation and Society (InSIS) and the European Neuroscience and Society Network (ENSN) (cancelled)

The aim of this paper is to investigate the neurosciences as an object of study of the political sciences and to describe what could be identified as a neuroscientific governmentality. Such a neuroscientific governmentality could be seen as part of the governance structures that emerge to cope with the effects of the so called neo-liberal transformation of the welfare state.
The paper seeks to map the development and diffusion of neuroscientific thinking and neuroscientific-based interventions by examining ‘political history’ and the interplay between neuroscientific promises on the one hand and intensified competition among individuals as well as among nation states on the other hand. The paper argues that the epistemological shift – termed neuroscientific governmentality – together with the transformation of the welfare state will shape the future use of neurotechnologies and the regulation of neuro-markets.
The first part of the paper considers the political history of ‘neuroscientific governmentality’ by arguing that the “decade of the brain”, announced in 1989 by US President George Bush, Sr., constitutes an important break in the history of the emergence of the brain industry. Starting in 1989, the field today called neurosciences began to group together previously disjunct fields that had the brain as the centre and starting point in explaining complex phenomena such as behaviour in general. This represented a dramatic extension of the field and to some extent a transformation into a transdisciplinary field focused on neuroscientific applications and the potential future use of neurotechnologies (advanced pharmaceuticals, cognitive enhancement drugs, imaging technologies, implant technologies). This shift to applications was accompanied by trends and future visions to use neurotechnologies for neuro-enhancement. The focus of the paper is how the brain became a ‘boundary object’ that facilitated discussion among political, academic and industry stakeholders with multiple interests and different perspectives, preferences, practices, and desired outcomes.
I argue that the emergence of neuroscientific governmentality and the anticipated widespread use of neurotechnologies in the future are supported by the politics of risk privatization and the decline of the welfare state. The current and potential commercial applications of neurosciences are embedded in imaginations of future societal pay-offs, needs, and priorities that force policymakers to ‘liberalize’ regulatory barriers to the use of future neurotechnologies.