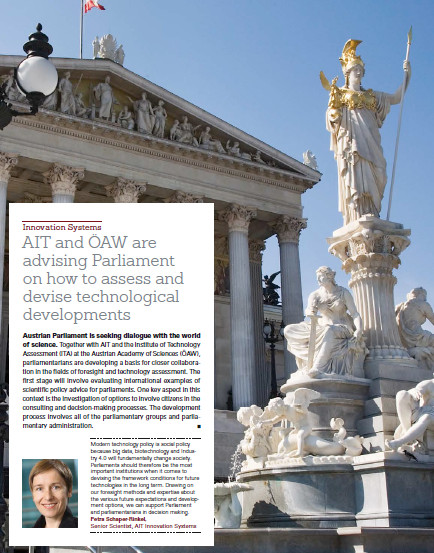 „Tomorrow Today“ on our Project/Study for the Austrian Parliament

The new project focuses on foresight and the assessment of developments in science and technology as well as their social, economic and political effects. A first study will evaluate international experience and identify potential topics of future research.

Grand societal challenges such as climate change, demographic change and resource scarcity require long-term policies as well as cooperation of different policy areas in research, technology and innovation policy (RTI policy). In a number of countries in Europe and beyond, parliaments take an increasing role in dealing with these challenges. Scientific expertise is often provided by experts from the areas of foresight and technology assessment (F&TA).

The aim of Foresight is to anticipate options with regard to important issues in science, technology and innovation. Through its participatory and interdisciplinary approach Foresight can support Members of Parliament to identify options for the future and support anticipatory governance. The study conducted by the AIT- Austrian Institute of Technology in cooperation with the ITA – Institute of Technology Assessment of the Austrian Academy of Science – will explore ways to support the Austrian Parliament through scientific expertise in foresight and technology assessment.

The study investigated how scientific expertise in the field of F&TA could best be made available to parliament. Parliaments are confronted with a multitude of complex, often knowledge-intensive and ethically controversial social challenges. The tackling of central challenges such as climate change, demographic change or resource scarcity requires the consideration of various policy fields in research, technology and innovation policy (RTI policy). In many countries, parliaments play a central role in responding to these so-called „Grand Challenges“. The necessary scientific expertise is usually provided by experts from the fields of foresight and technology assessment (F&TA). Parliaments are offered support in the assessment of developments in science and technology, their social, economic and political impacts, as well as in the involvement of citizens.
On behalf of the Austrian Parliament, the Austrian Academy of Sciences and the AIT carried out a study with interactive involvement of members of parliament and the parliamentary administration. The study investigated how scientific expertise in the field of F&TA can best be made available to parliament.
To support this, international experiences of parliaments with F&TA were identified and a proposal for science-based F&TA support for the Austrian parliament was developed with the involvement of members of parliament and staff of the Nationalrat. In interviews and workshops, the specific needs of Austrian parliamentarians were identified and the information flows and discussion processes, in particular in the field of RTI policy, were analysed in order to find concrete starting points for the best possible input of R & T knowledge.